Monitoring Conflict Zones Without Relying on the Wandering Media Focus

In high-risk areas of the world, unexpected events impacting civilians, both local and foreign travellers, are happening on an almost daily basis. Missile strikes, car bombings, and evacuations continue to be a constant threat in conflict zones. While many rely on western media companies as a reliable source of information, media companies are struggling to hold their audience’s attention at times, resulting in a shifting focus of coverage. There is a steep rise in unreported events as other stories take precedence in the news cycle. Relying on mainstream media outlets alone, may put you at risk of being hours behind on critical information and updates, or missing an event entirely. In this analysis we’ll take a look at a series of explosions that occurred within a day of each other, but have gone under-reported by traditional media outlets.

On March 23 a car bomb was detonated in a park in Lashkar Gah, Afghanistan. 14 people were killed and dozens more wounded. Samdesk first alerted our users to this explosion at 14:32 GMT via our real-time knowledge engine detecting on-the-ground social media sources. There was no alert from the BBC, Al Jazeera, or CNN to this event. Both the France hostage crisis in Trebes and American high school walkouts were happening simultaneously, dominating headlines and attention. 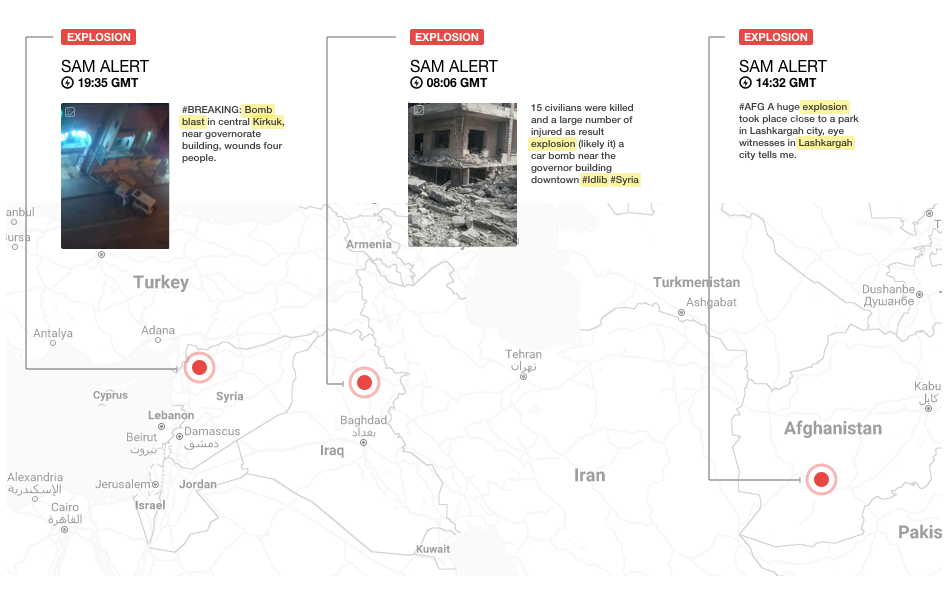 The next day, on March 24 another car bomb went off in Idlib, Syria killing 15 and injuring dozens more. Samdesk alerted users to this event at 08:06 GMT. Again, there was no breaking alert sent out by any of the major news sources covering the Middle East.

Some hours later another car bomb went of in Kirkuk, Iraq near a governorate building. Samdesk alerted users to this explosion at 19:35 GMT – with no breaking coverage from the mainstream media. Instead, attention was focused on a different explosion, which occurred on the same day, in Alexandria in Egypt. This explosion was less severe, killing two, but garnered more attention as it was believed to be targeting the motorcade of the city’s chief of security, Major General Mostafa al-Nemr.

The media plays a critical role in helping the world stay informed, but as business models struggle to adapt and consumer attention becomes more and more finite, world events that don’t grab mass attention can go unreported. Social media on the the other hand is decentralized as people share their own experiences and events happening in their local areas are doing so regardless of media attention. Alternative global monitoring solutions to the mass media are becoming mandatory as the pace of events continues to increase. Samdesk aims to be your AI Analyst; constantly focused on events that impact your business, story, or people. A real-time catch all for everything that’s happening around the world, distilling events into an easily-consumable stream, keeping you on top of everything that’s happening, not just what’s trending.

Know what’s happening, when it happens.