On June 24, around 01:30 EDT, residents of a 13-story apartment building in the Surfside neighbourhood of Miami were woken up by fire alarms, falling debris and what felt like an earthquake. Within 30 minutes about half of the building had collapsed bringing 67 units to the ground. This heartbreaking event has captured the world’s attention and many details are still unknown. We breakdown the chain of events that happened in the first few hours of the tragic collapse and the ongoing impact still to come.

The Breakdown of Events

1:30 am: Residents were woken up by fire alarms and falling debris

2:00 am: Around 2am half of the 13-story building collapsed, taking about 67 units with it. Some residents were able to escape but there were little details at this time.

2:12 am: First mention of collapse on Twitter, the tweet mentioned that emergency services were enroute and tagged official emergency sources.

2:12-2:17 am: A flurry of chatter and live videos shared on both Twitter and Snapchat allowed the samdesk platform to corroborate details fast.

2:24 am: Samdesk updates clients with new information including:
-- Confirmed time of collapse happened around 2 am local time (06:00 GMT)
-- Revealed Building was at least 13 stories high
-- 106 units from local FD and PD were on the scene with 24 units from Broward assigned
-- Evacuations were taking place in the rest of the building
-- Reports of power outages in the sector

2:35 am: Video content continued to come in via eye-witnesses on the ground and picked up by samdesk, showing the aftermath of the collapse 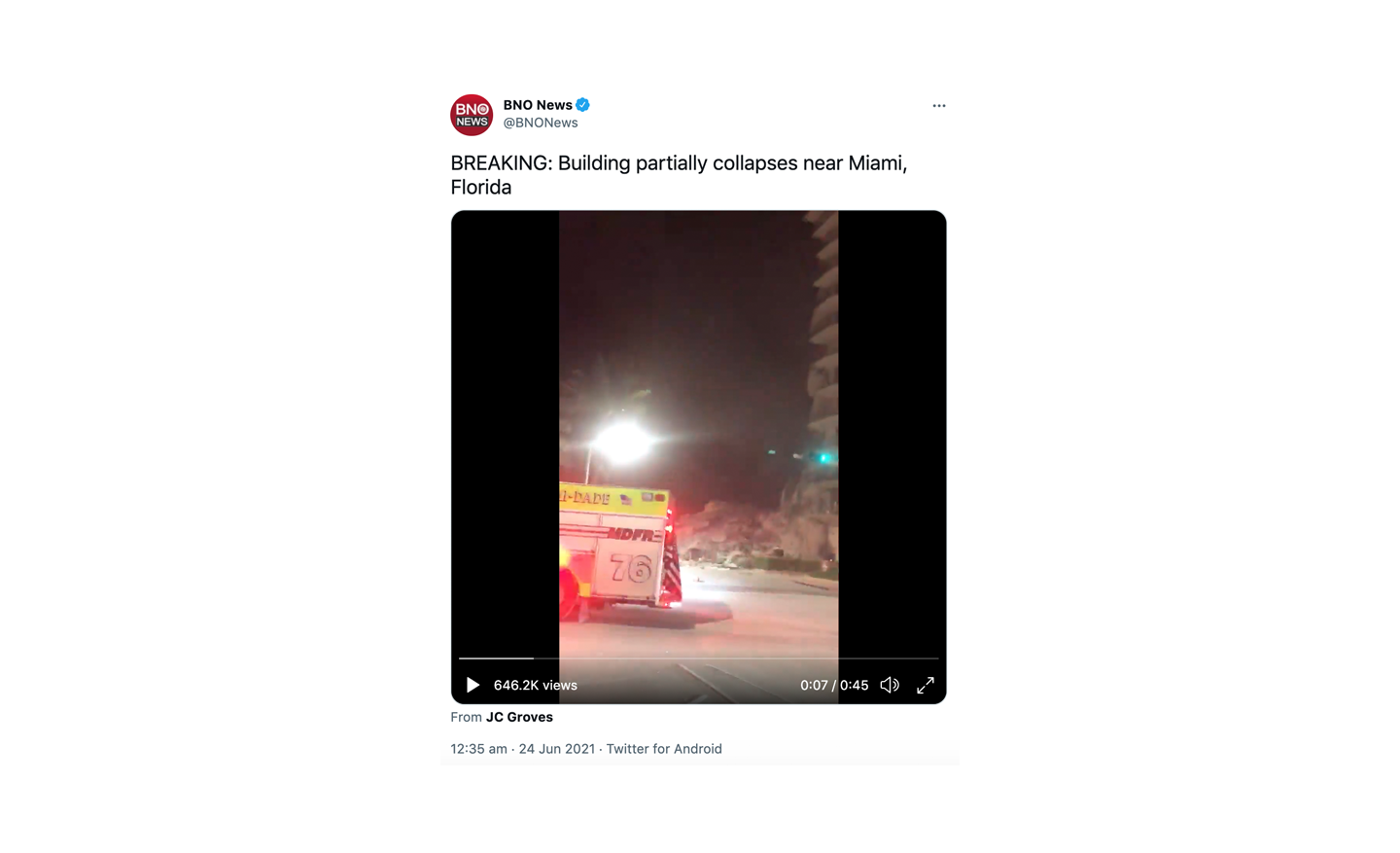 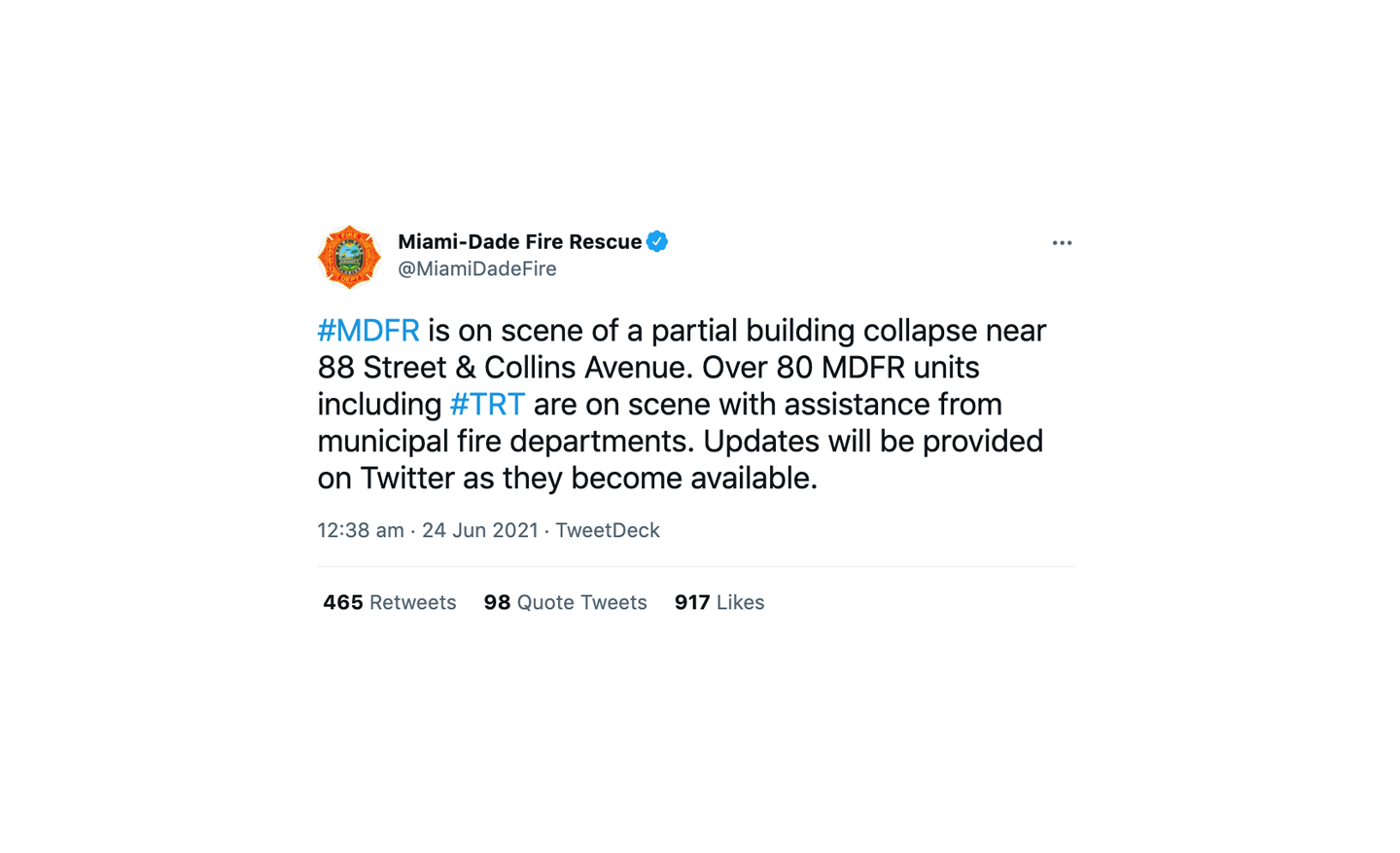 2:44 am: First local news outlet reports on the event. 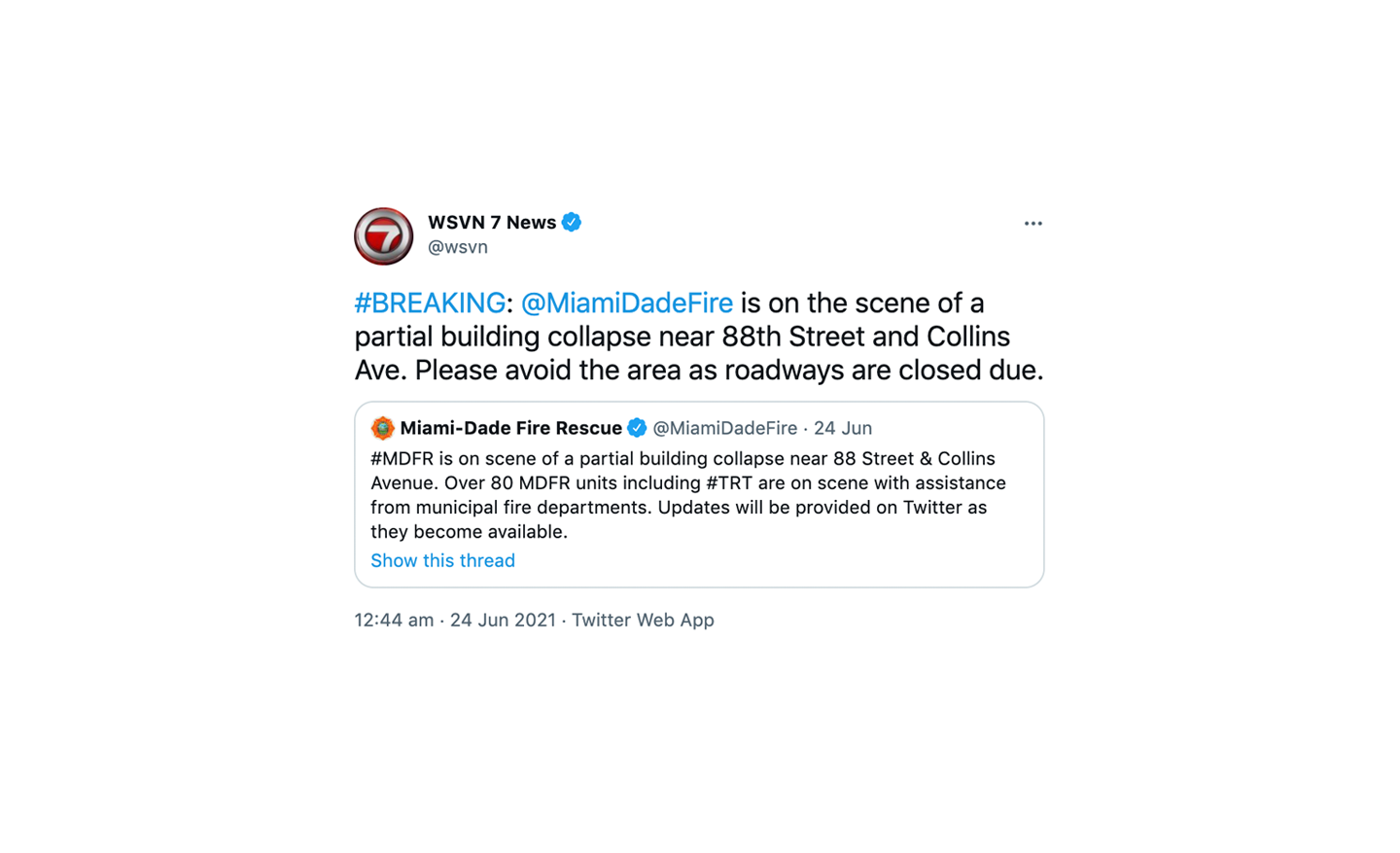 The collapse has resulted in at least 46 deaths and as of July 7, 94 people were still unaccounted for. The Miami-Dade Fire Rescue have reported that 37 people have been rescued so far. 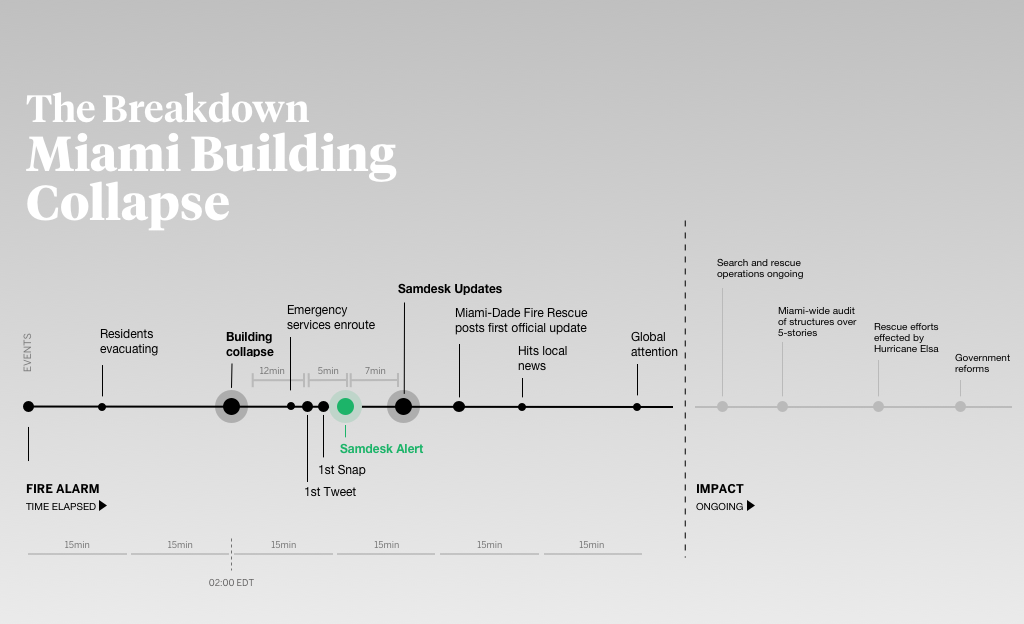 Speed to awareness of this tragic event was crucial for samdesk users. Manually trying to find and follow the story would have been time-consuming and difficult. Official updates didn’t get posted until over 30 minutes after the collapse, and local news outlets didn’t start reporting on the event until 44 minutes after it occurred. This gave samdesk clients over 20 minutes of crucial time to verify information, and get ahead on the crisis.

Having continuous updates in one Samdesk Alert meant that teams could act quickly and effectively. At 2:24am samdesk updated clients to new crucial information from the scene. Images and videos from Snapchat proved vital for context and updated situational awareness, allowing teams to corroborate the scene fast.

Nearly two weeks after the traffic collapse, officials are still trying to confirm how many people were in the building at the time of collapse. Reports of more than 200 workers from emergency and specialized construction crews have been working around the clock on recovery efforts through heatwaves and a category one hurricane.

The ongoing effect for the Miami area is already being felt, with sweeping structural integrity audits of all buildings that are five stories or greater, and talks of government reform on building standards. It’s crises like these that create a sobering view of how quickly disaster can strike, and how time to awareness can make all the difference.