At around 16:20 on April 15, the first fire alarm rang in Cathédrale Notre-Dame de Paris. Security guards evacuated incredulous church-goers and tourists whilst they investigated the source, but were perplexed by what appeared to be a false alarm. It wasn’t until 16:43, when a second fire alarm started to ring, that the flames began to reveal themselves. Security soon discovered the location of the fire and alerted local fire services at 16:51. Firefighters were on the scene within ten minutes of receiving the call, but unfortunately, the blaze had a good head start.

Samdesk first picked up information about the fire at 16:52, one minute after firefighters were called. After searching for more evidence to support the claim, samdesk generated an alert at 16:59, around the time firefighters would have been arriving on scene. This was all from on-the-ground reports on social media, as the smoke was getting worse and passersby were suddenly stopping to post online about what they were witnessing.

The speed of this alert was crucial for samdesk users as, it was such an extraordinary event, manually trying to find and follow the story would have been time-consuming and difficult. Having a continually developing feed of all the latest information in one Samdesk Alert meant that teams could act quickly and effectively. Images and videos from Snapchat proved vital for context and updated situational awareness, whilst Samdesk's in-built translation systems meant language barriers were not an issue when scanning Twitter. 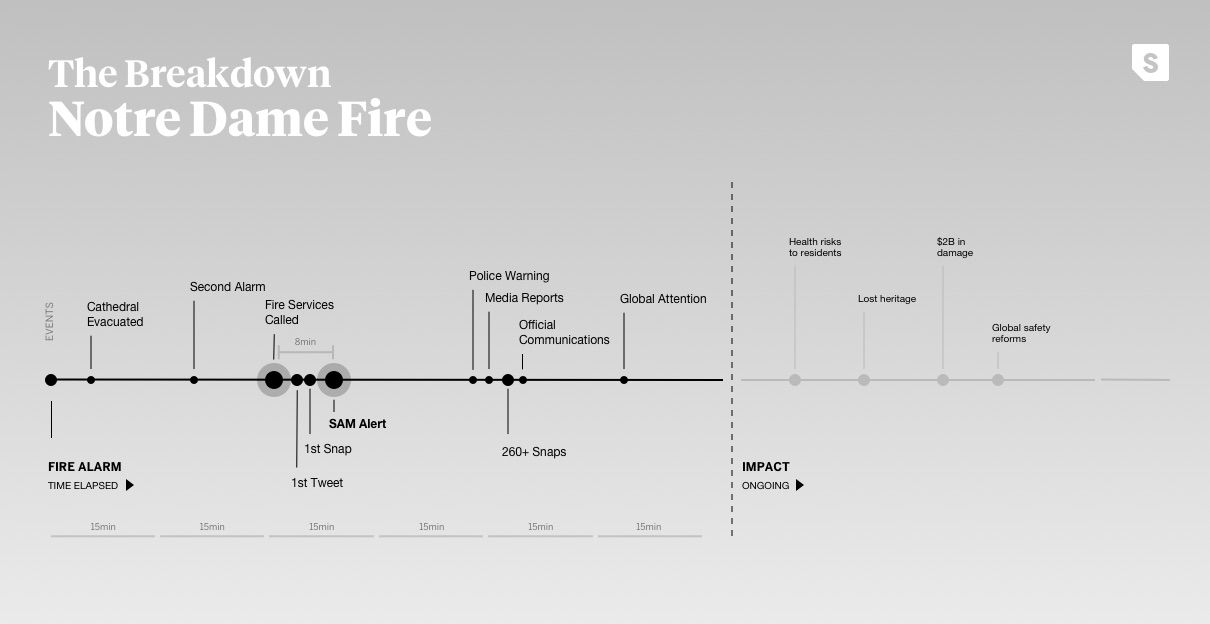 News organisations soon started to pick up on the event, with breaking headlines pouring in from France’s Le Monde at 17:13 and BBC Breaking News at 17:16.

In the end, it took 400 firefighters over the course of 12 hours to completely extinguish the fire. Paris’ fire chief noted that had it continued, the bell towers and other parts of the building would have collapsed. So far, the damage has been estimated to cost anywhere between $1 – $4 billion to repair, with rebuilding timelines ranging from 4 to 5 years, right up to 10 years just to train the amount of people needed with such specific skills. 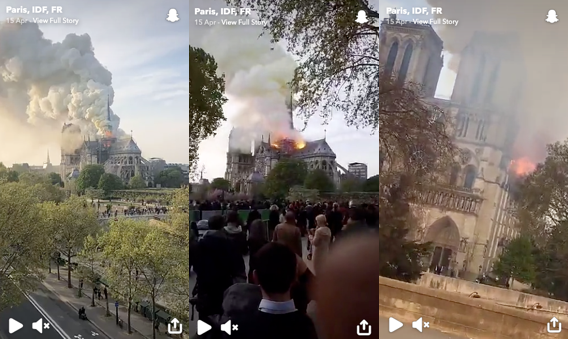 The long term effects of an incident like this are far-reaching and incredibly long-lasting. The immediate loss of historic artefacts impacts the culture and economics of not just Notre Dame but France as a whole. Local residents, office workers and even tourists watching the fire face great health risks from such an intense blaze. Earlier in June, a lead test was called for pregnant women and children due to 300 tonnes of lead melting from the roof and steeple during the fire.

A potential $4B to cover a complete restoration means the world is now looking at their own cultural landmarks to ensure something like this does not happen to them. Easy fixes such as linking the fire alarm to the fire department can prevent a substantial amount of damage. This is crucial for larger buildings, such as Notre Dame Cathedral, where the longer you spend searching for the source the more devastating the impact will be.

In unique, reactive situations like this, social media can give great situational awareness and context to a developing story when the facts are yet to be clarified by official channels and news sources. Samdesk takes publicly available data from on-the-ground accounts and turns them into actionable alerts, delivering speed and context when you need it most.